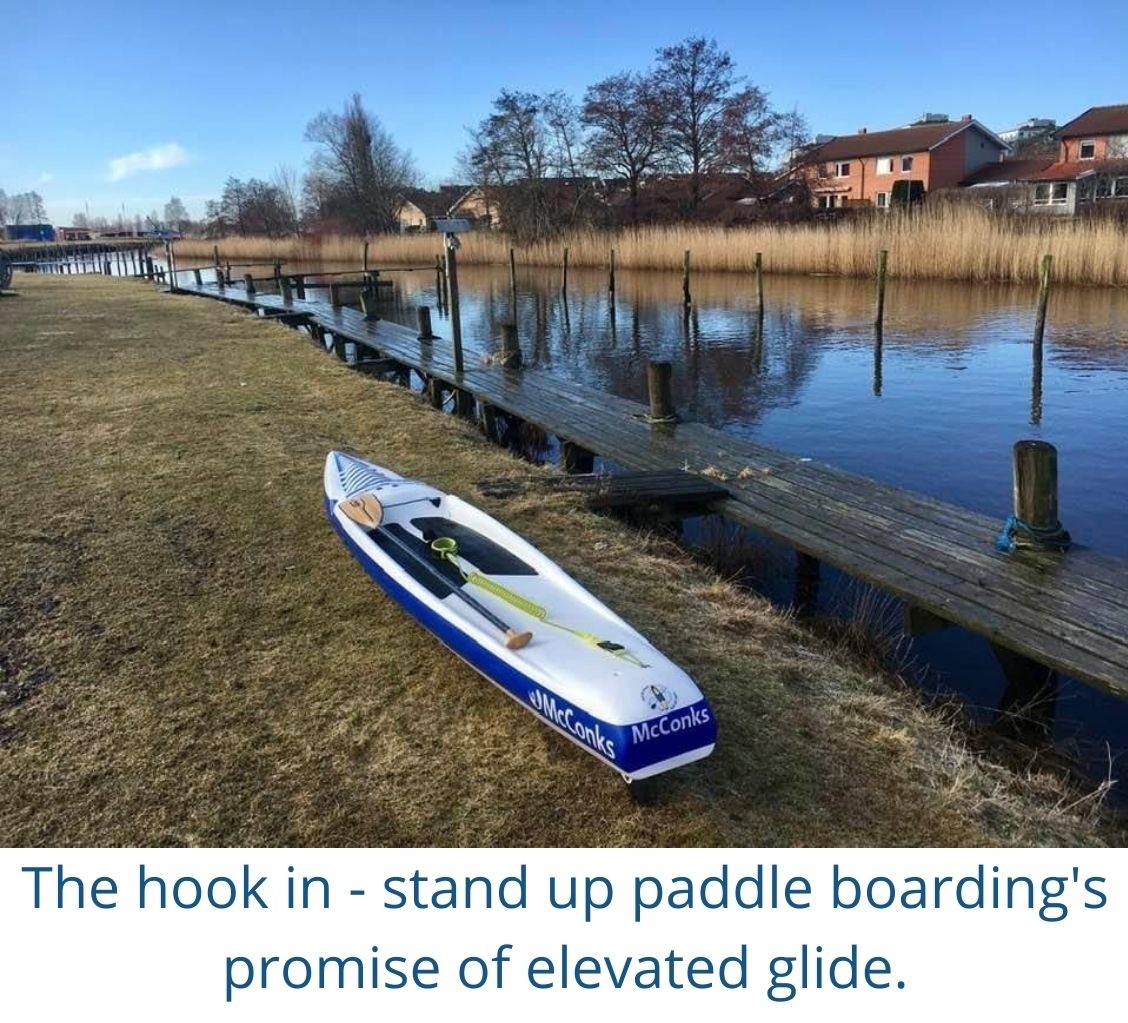 Why is stand up paddle boarding so popular? Sure, it looks cool. And to a degree accessible from afar. Those two reasons alone do enough to get paddlers onboard. But what about following those first forays?

Elevated glide is the biggest hook in for SUP. Its grabs hold and keeps most SUPers locked in, salivating for more. And elevated glide only takes two things to bond the rider like glue to SUP: the paddler to be stood and one single blade stroke to propel he or she forwards. As soon as you feel the glide properties of a stand up paddle board you’re smitten.

For most paddlers they’ll be looking at your bog standard 10’6 (ish) SUP to learn on. Whilst these are perfectly fine the rounded nose and shorter length isn’t as efficient for glide as something longer with an elongated front.

The tag ‘touring board’ isn’t the best but it’s one that’s stuck and is used to describe stand up paddle boards starting around 11′ and progress in length up to (in some cases) 17′. This may sound excessive but longer board glide so much better than shorter designs so are therefore more efficient. And if it’s glide that hooks riders in then any shape that enhances this property has to be worth a look.

Currently, it’s inflatable stand up paddle boards making up the majority % of equipment sales – and this shows no sign of slowing down. A large proportion of newbie paddlers think inflatable start and stop with rounded nose 10′ platforms – which isn’t correct. As with their hard shell siblings inflatable SUPs also come in a wide range of shapes, including longer, more drawn out styles. These, just like hard boards, glide so much better and engage the paddler much more than shorter machines.

Beginner stand up paddle boarders would have no issue learning the ropes atop a touring SUP. In fact, the shape of these sleds means stability is actually improved with drawn out noses and tails thereby making them all the more beginner friendly.

The argument: ‘longer boards require more storage/transport thought’ doesn’t quite ring true either. Again, with inflatables, a 14′ touring SUP (whilst certainly less compact than a 10’6 all rounder) still packs down to a manageable package. And from evidence seen season in season out most riders keep their inflatable boards filled with air and have no trouble moving them around on land.

But back to the initial point of this article. If you’re wondering what all the fuss about SUP is then you need to step aboard and get involved. We guarantee that with the right conditions/weather you too will discover the sensation of elevated glide and be smitten like the rest of us.