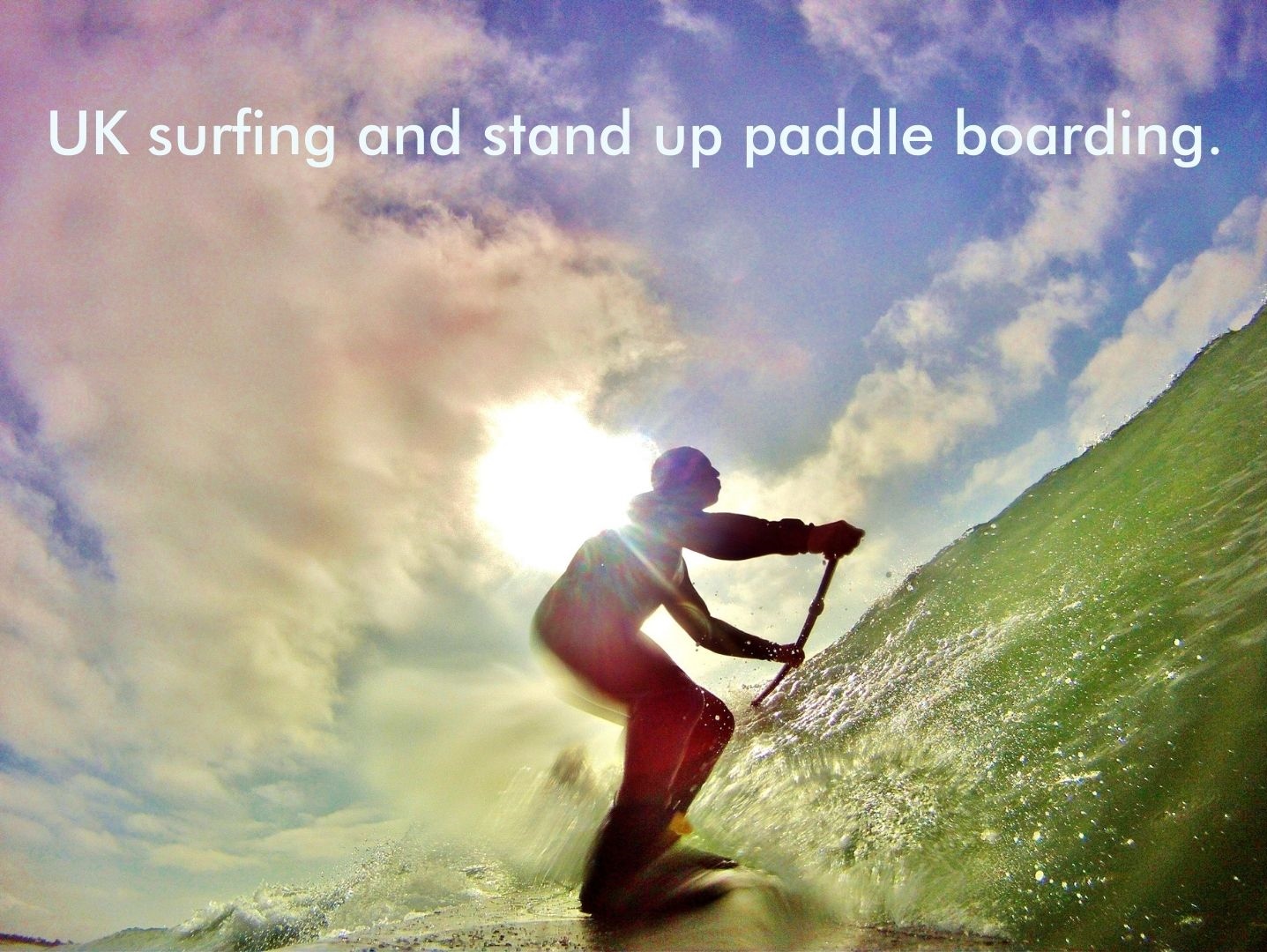 In the UK we have distinctively average surf (when compared to the likes of Hawaii, The Canaries or even places like SW France). This is mainly because of our changeable weather and a far reaching continental shelf that zaps much of that wave energy before it jacks up onto shore.

Of course, we get awesome days, but these are punctuated with howling onshore winds, flat spells and situations where the surf looks great but often the wave doesn’t have the form once perceived from the beach. Choosing to wield a paddle and ride a board much thicker than your average surf stick (surfboard) gives many advantages – even inflatables. Being able to move around quickly, position, get a better position, take off earlier, avoid crumbly sections and perform moves that require years to perfect on a surfboard are all attractive traits stand up paddle surfing offers.

Much to the dismay of some diehard surfers, the fact you’re already standing tall eliminates the initial frustrating hurdle of learning to pop up. Almost going from zero to hero in a matter of minutes (or at least a much shorter space of time). With stand up paddle surfing you’re already on your feet, and poised for the take off before the wave’s even started to wall up properly – something that can be both a blessing and curse. (There’s been much criticism in the past of stand up paddlers hitting surf spots with no understanding and appreciation of surf etiquette. In some locations this led to agro although of late that hasn’t been the case).

SUP: not a surf sport!

Back when modern SUP landed in the UK the surfing industry jumped all over it. Here was a vehicle that could offer something different and would arguably be a more efficient route to wave shredding, ripping and tearing (relatively speaking). Surf shapes, once beginners had progressed from foamies, were stuck in high performance land during this time – think pointy arrow like boards that require skill and a deft hand to pilot. (We will add this has changed a little in recent years with more surfers starting to ride boards applicable to the types of wave they generally encounter).

There were a few alternative shapes kicking about – fish, eggs and such – but the surfing industry had yet to cotton on to the idea that volume, thickness and width can actually be good things – certainly for UK waves anyhow. Accessibility is, after all, everything.

As the SUP bug started to bite back pre-2010 a number of paddle sport luminaries, who could see the bigger picture, decided to act – and rightly so. Wanting (needing) to educate and inform SUP was repositioned as a paddle sport and NOT a wave sport (first and foremost). Flat water SUPing/floating on inland waterways, is all part and parcel of the versatile world of SUP. Not everyone wants to (or has the skills) for tackling waves. And so ensued a fairly aggressive distancing of stand up paddle boarding from surfing which has stuck to this day. As it stands there are less numbers of SUP surfers in 2021 than there were five years ago.  These days all stretches of water and conditions are primed for SUP attack with stand up possessing an identity all of its own, and mainly lakes, rivers, canals and placid coastal water being the favoured venue of the masses.

Establishing stand up paddling as a more flat water activity has seen UK SUP surfing fall off a cliff. Sliding along a liquid wall can be the most fun you’ll have on a stand up but many aren’t even aware this is a thing. With correct knowledge and education it’s possible to ride in harmony with other water users and enjoy Mother Ocean. In fact, if you hit up any break on an offshore day you’ll almost certainly come across other SUPers in the line up without any ‘biff’ vibes – such is the general acceptance now from a wider audience.

Of course there’s also a skill element to this. It’s widely reported that most newbie stand up paddle boarders aren’t equipped with prior experience. So we do have to tread carefully as encouraging those without a proper build up to waves is asking for trouble. That said there’s no reason in the right location with the right conditions SUPers shouldn’t be more widely seen riding or learning how to surf waves. Lessons and coaching will help massively if you’re thinking about heading into this environment, as will taking things slowly. There’s definitely a right and wrong way to approach the surf on a SUP!

For now, if you’re keen to get stuck into some wave action then take the time to learn what you can about wave environments. Understand surfing etiquette and rights of way and knowing your personal limitations and those of your kit are super important. Try different gear when you get the chance and don’t be afraid to learn new skills. Get the right advice from qualified/experienced people and you’ll be stood in good stead. But above all have fun!