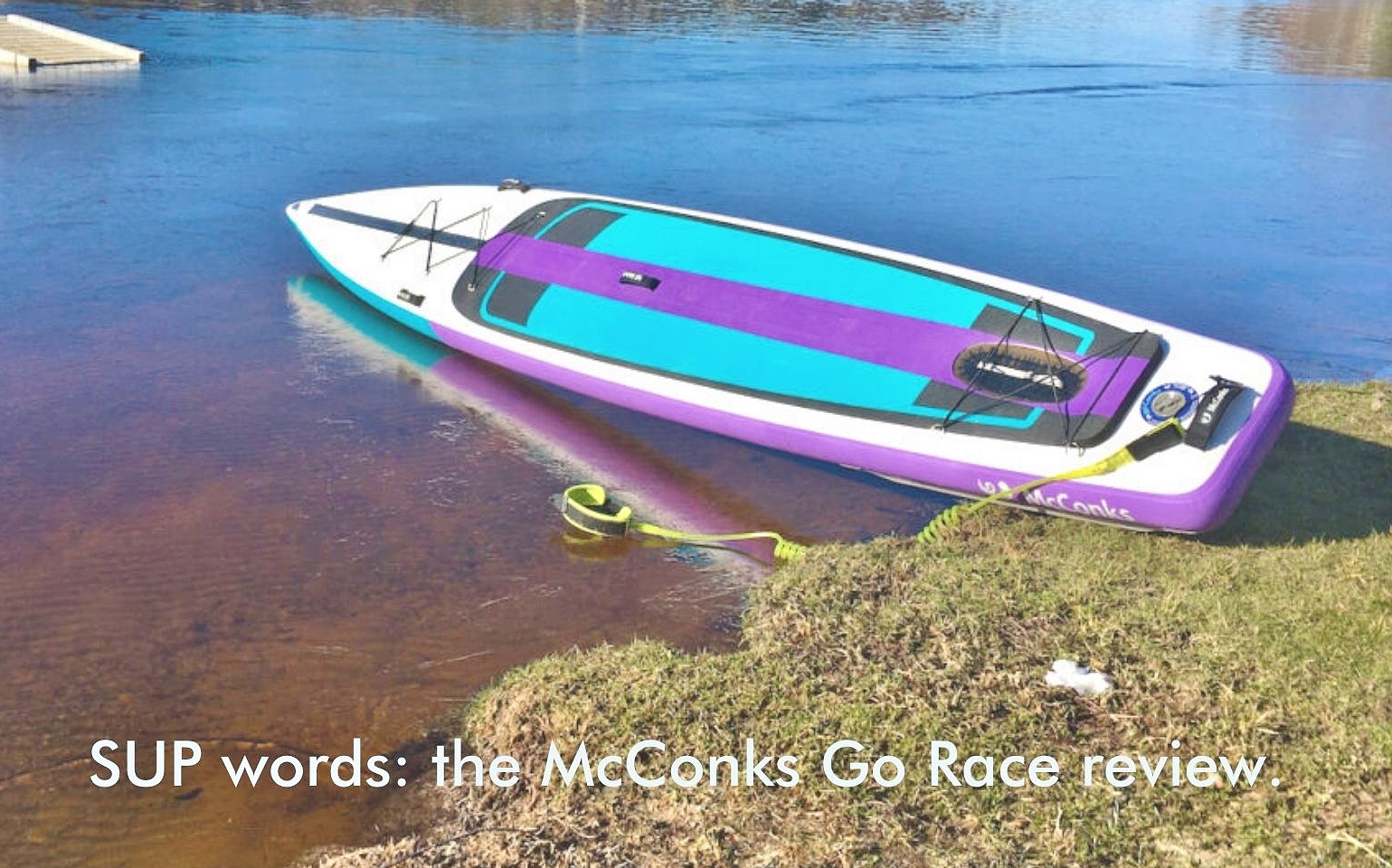 Andy at McConks has been working on a race board for a little while now and in the spring of 2020 sent me a prototype for his new 14’ board, the Go Race. Some paddlers might turn their noses up at an inflatable race SUP but as I found out they are missing out on a very versatile type of board.

What’s in the box?

With the board was a good quality McConks wheelie rucksack, a McConks coiled leash, 9″ touring style fin and the fin box. Yes, the fin box is not glued to the board. The production boards will be supplied with a HP6 triple action pump and a repair kit.

The colour scheme is … unique (1). Looking past the purple the stand out feature in the looks is the carbon stringer on the deck, this runs from the nose under the deckpad past the paddler towards the tail, when wet on a sunny day it really catches the eye.

The nose is well finished, it looks a little like a hardboard in profile due to the curve the lower stringer gives the bow. Close to the nose we have a RAM mount with a D ring, this gives a rock solid attachment point for a GoPro or any other action camera and a towing eye, just in case it’s needed.

Further back on the deck we have a 3 pairs of D rings with a bungee cord rigged across them, two handles either side and forward of centre and a centre handle which is well placed for weight distribution. The handles are nicely padded and very comfortable for long carries. The deck pad on this board has a nice texture under bare feet and it’s also plenty grippy with wetsuit boots or wet-shoes.

Towards the tail there are two more pairs of D rings also with a bungee across them, a kick pad and a combined handle and D ring for your leash. It’s good to have the option to carry cargo at the rear but if you use the kickpad a lot you will want to remove the bungee. You will also find the top of the fin box back here, sitting under the cargo area in front of the kickpad.

The McConks branding on this board is subtle with logos on the side near the tail and on the handles. The production boards will have similar subtle detailing as shown in this graphic

Flip the board over and you’ll find the sibling to the deck stringer, starting at the nose this is a mirror of the one you’ll see when paddling. The rest of the hull is plain until you get to the tail. Here you’ll find the other side of the fin box and a hard edge on each rail. There is no hard edge across the tail because McConks modelling found that unless the board can be maintained at a speed where it would be on the plane the rear hard edge trapped water slowing the board.

So what’s with the fin box?

When designing the board Andy wanted to make sure that it could be rolled as easily as his other boards, it would appear that the carbon stringers on some boards make them harder to roll and therefore slightly more bulky than their non-carbon competitors. He also wanted to minimise drag on the hull by recessing the fin box, heading towards a certain cycling teams mantra of ‘marginal gains’.

His solution is a two part plastic structure that fits either side of a hole through the board and secured in place with a simple strap. The top and bottom plates of the box fit flush with the board surface giving a neat and streamlined appearance. When rolled the GoRace is broadly the same size as a 12’6” x 32” touring iSUP that I have, Andy’s design aim has been fulfilled.

There is a third benefit to this design. I am a huge fan of FCS II click in fins and have been using them for some time now, my oldest one has been my go-to fin for over 4 years on a multitude of boards. I am also aware that these fins can go missing in action and that more often than not that has been from an iSUP fin box. Having a rock solid fin box should hopefully solve any click-in fin issues.

The point of a prototype is to find out what works and what needs improvement. On this board a small area around the hole for the fin box is not perfectly finished, this results in a small gap between the lower plate and the board, it’s so small that it’s hard to take a photo that clearly shows it. I had also thought that fitting it was a little fiddly until I lent the board to a friend, he simply put the two bits together and slotted them into place. No faffing or fiddling required.

How does it perform?

The board arrived in Sweden at the beginning of March which is still winter here. Our first outing was with air temp around freezing and water temp only slightly higher, I was not keen to test my drysuit out! Initially things were a little wobbly as this board is a little narrower than iSUPs I’ve paddled recently but once I got moving it felt just like a race SUP.

Second paddle, I had to break the ice at the shore to get to clear water. Not ideal conditions to test a new board but there are worse things to have to do. I’d already stopped thinking about the width.

Until I started to write this I also confess to not thinking about flex either. With the board inflated to approximately 20 PSI I can feel no flex in normal paddling. This is confirmed by the photos, I am between 95 and 100kg and the board at that pressure is flat in with me on it. When sprinting I can feel it move under me but so does my Allstar. And yes, I can jump up and down on the GoRace and get both ends out of the water at the same time but who does that on a SUP? For load testing the board has had me (100kg), my Labrador (40kg) and a Labrador friend (30kg) on it, not much paddling was done with 70kg of excited dog but the board didn’t bend.

The recess for the fin is long enough for any of the fins I have, even an FCS JB runner which has a very long base. I have had a niggle with some fin screw plates that have been thicker than the slot in the box, irritating but easily solved. And some narrow fin screw plates have turned in the slot but again that’s an irritation and doesn’t impact on fin security.

That flat nose is perfect for the paddling the Go Race and I will do. The shape of the nose means that the board moves through the water nicely, where many iSUPs seem to shove water out of the way this works more like a hardboard parting the water neatly, on flat water it is very good. In the interests of testing I’ve used it in a range of conditions from strong wind to choppy seas and the board has performed flawlessly. I’ve also passed it around to other paddlers I know who have also approved, from novices to very experienced paddlers all the feedback has been positive.

Tracking with the supplied fin is good and board stability is very good.

I’ve tested the Go Race against my other two 14’ boards; a 2016 Allstar (14’x27”) with Allison fins and a McConks Carbon Sport (14’x28”). I find that the Allstar is marginally faster over longer distances and excels in rough conditions but the McConks has given me my fastest ever 1km time.

In the last month I’ve paddled over 150km split across the three boards. The figures below are from several timed runs on my local lake, this is 4km long, relatively sheltered and has no significant current. For data collection each activity was over 4km out and back to reduce the impact of head/tail wind, all were done with the same fin and with the same paddle. I have not included any timed sprints from my data.

The figures below are for a steady pace that I can maintain for an hour on each board in ideal conditions;

The following are the fastest 1km times from all that data, note that these are not sprints but steady state paddling;

The Go Race is no slouch when it comes to moving effectively through the water.

What the data doesn’t show is that this board, and indeed most iSUPS are pretty much indestructible and that’s why I asked Andy for this board, the event that I hope to compete in later this year is 22km including sections on lakes, rivers, some mild white water, some carrying and a section along the coast. It’s a very varied course and should be a lot of fun when I don’t have to worry about damaging the board. Using the Go Race paired with the McConks 4.6” gummi fin has also allowed me to access the shallower, rougher waterways near me, expanding my paddling horizons, giving me access to some beautiful places and stunning nature.

If you want a fast board that you can roll up and put in a rucksack then this could be the board for you.

The prototype has now been prised out of my hands by a friend here who borrowed it for a 21km coastal run. He was so impressed he made Andy an offer for it and I’m now waiting impatiently for Andy to send me a production model.

Images from Chris Jones unless specified.

(1) Andy tells me that the prototype colour scheme was for one particular customer who really likes purple!

Find out more about the McConks Go Race iSUP here.